It is a fact that warm air can hold more water as vapour than cool air. Condensation is caused when moisture-laden air comes into contact with a cold surface - the air is cooled to the point where it can no longer hold its burden of water vapour. At this point, (DEWPOINT), water begins to drop out of the air, and is seen as condensation on surfaces. On impervious surfaces such as glass and gloss paint, beads or a film of water collect. On permeable surfaces such as wallpaper and porous plaster, the condensing water is absorbed into the material. Therefore, the problem is not always initially obvious.

One should also be aware that the problem can occur well away from the site of most water vapour production. E.g. water vapour produced in the kitchen may diffuse through the house into a cold bedroom where it will condense on cold walls.

Condensation is directly associated with mould growth which is associated with many health problems. It is this that the occupier sees first, and it gives an indication of the potential scale of the problem. The mould is usually found on decorative surfaces, especially wallpapers, where it can cause severe and permanent spoiling. In many cases, the mould and its spores ('seeds') give rise to complaints about health, and cause the "musty" odour frequently associated with a damp house.

The obvious places for condensation to occur are on cold walls and floors, but it can also occur in roof spaces and in sub-floor areas where there is a timber suspended floor; in the latter case, it can lead to rot developing in floor timbers.

The Link Between Poor Health and Damp Conditions

For many years people have know of the health problems associated with damp conditions. Many recent studies have been done to prove the link between damp, moldy conditions and health problems in both adults and also those most at risk children. Below is an exert from one such study and we have included some links to a few others.

More than 1,000 different kinds of indoor molds have been found in U.S. homes. Molds spread and reproduce by making spores, which are very small and lightweight, able to travel through air, capable of resisting dry, adverse environmental conditions, and hence capable of surviving a long time. Molds need moisture and food to grow, and their growth is stimulated by warm, damp, and humid conditions.  Respiratory infections due to inhalation of the fungus Aspergillus have been documented mostly in immunocompromised individuals. Molds also have been associated with some cancers. Two mold-produced toxins (aflatoxins and ochratoxin A) have been classified by the National Toxicology Program as human carcinogens.  In its 1993 report “Indoor Allergens,” the Institute of Medicine (IOM) concluded that airborne fungal allergens were most often associated with allergic diseases, such as allergic rhinitis/conjunctivitis, allergic asthma, and hypersensitivity pneumonitis. In its 2000 report “Clearing the Air: Asthma and Indoor Air Exposures,” IOM concluded that there is sufficient evidence of an association between exposure to mold and exacerbations of asthma. For people who are allergic to mold, common effects include hay-fever-like allergic symptoms. Certain individuals with chronic respiratory disease (chronic obstructive pulmonary disease or asthma) may experience difficulty breathing when exposed to mold. Also, people with immune suppression or underlying lung disease are more susceptible to fungal infections. 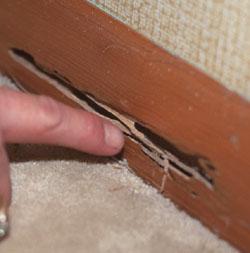 ISOPTERA - derived from the Greek "iso" meaning equal and "ptera" meaning wings, refers to the similar size, shape, and venation of the four wings  Termites are often referred to as 'white ants' because of their creamy colouring and ant-like appearance.There are over 350 species of termites in Australia, of which some 20 species cause damage in timber houses. Only Tasmania is free of "economically significant" termite attacks to buildings. The species can be categorised into four main groups depending on their habits:

If you would like to find out more, ring Barry on 0419 842 686. Barry also offers home inspections for a fee. If you are worried about termites, rising damp, condensation or moisture damage then a home inspection can help.